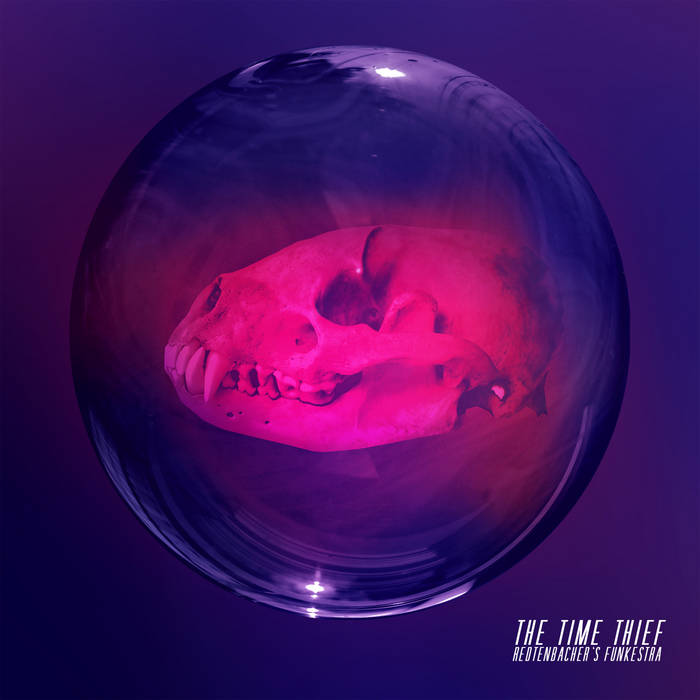 Peter Jones There is just so much to love on this album, too much to mention every track. So...

Funkie Moon has those drops that just ... hang... It sounds likely to be great live jam opportunity.

Universality: this is the funkiness you are looking for -- you can't get away with just tapping a foot to this!

The trio of Mr Goyle, Walkin' Struttin' Strollin' and The Time Thief are also stand out funk, the middle my second favourite on the album.

Stefan Redtenbacher remains the consummate bass master, not forgetting his sizable talents as a writer, producer and arranger. While his technique and taste are impeccable, it’s his mighty groove capabilities and strengths as a bandleader that really shine on the Funkestra’s latest album.

In fact, it’s these latter qualities that make The Time Thief a real joy to listen to, marking it out as a real ‘band’ record and not just a vehicle for some OTT bass chops.

Having ploughed themselves a deep funk furrow on 2015's Dr Hypenstein, the group have matured into a superslick funk machine that run riot with a whole world of syncopated grooves.

Be it the vintage horn-honking strut of opener ‘Guilty’ or the electro head charge of ‘Funkie Moon’ – this is fantastic wall-to-wall funk. Bottling some of their slamming live energy, The Time Thief bounces along with hip-shaking ease without losing sight of a good tune or a powerful groove.

While some funk bands labour under their influences, Redtenbacher’s Funkestra have used some deeply embedded ingredients to produce an album that’s dripping with slinky riffs and smooth new grooves.

Artwork and design by Joshua Hibbert.
For licensing contact info@woodenhatrecords.com

Austrian-bred bassist and funk fiend Stefan Redtenbacher is an anomaly, anachronism and a defiant demolisher of the pigeon- hole. Currently based in London, Stefan and his band Redtenbacher’s Funkestra deliver “out-and-out spectacular funk” (Snowboy) or, as UK Bass Guitar Magazine put it, “a near perfect slice of jazz-funk from one of Europe’s great players.” ... more

Bandcamp Daily  your guide to the world of Bandcamp